Paranormal Activity is a 2007 American supernatural horror film written and directed by Oren Peli. The film centers on a young couple, Katie and Micah, who are haunted by a supernatural presence in their home. It is presented in the style of “found footage”, from cameras set up by the couple in an attempt to document what is haunting them. While the storyline of the movie itself is an artistic creation, many of the supernatural events portrayed in the movie were loosely based on actual events which the director claims to have researched and incorporated into the storyline.

Originally developed as an independent feature and given film festival screenings in 2007, the film was acquired by Paramount Pictures and modified, particularly with a new ending. It was given a limited U.S. release on September 25, 2009, and then a nationwide release on October 16, 2009. The film earned nearly $108 million at the U.S. box office and $194 million worldwide. Paramount/DreamWorks acquired the U.S. rights for $350,000. It is the most profitable film ever made, based on return on investment, although such figures are difficult to verify independently as this is likely to exclude marketing costs. 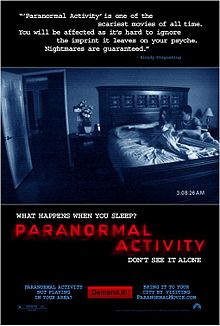 In September 2006, young couple Katie and Micah have recently moved to a new house in San Diego. Katie claims that an “evil” presence has haunted her periodically since childhood and believes it is still following her. Each night, Micah mounts a video camera on a tripod in their bedroom to record any activity that occurs while they sleep. The first night, the camera records running footsteps and the sound of keys dropping onto the floor. In the morning, the couple find their keys on the floor. Katie hires psychic Dr. Fredrichs, who assesses that Katie is being haunted not by a ghost but by a demon. He says the demon feeds off negative energy, and his intent is to torment Katie no matter where she goes. He advises them not to taunt or communicate with the demon and to contact demonologist Dr. Johann Averies for help. Though Katie seems interested, Micah does not take this seriously.

During the third night, the camera captures a low rumble and the bedroom door moving by itself. When Micah watches the footage the next day, he becomes excited that a demon is in their home and urges Katie to get a Ouija board. Katie refuses and makes Micah promise not to buy one. On the 5th night, demonic noises are recorded; Katie awakes from a nightmare just before a loud thump is heard from the living room. The couple investigate but find nothing. After a week of no paranormal activity, Micah begins to taunt the demon, worsening the situation. On the thirteenth night, Katie is awakened by movement in the hallway; the demon loudly screeches and there is a loud bang. The chandelier is swaying when they investigate downstairs. Micah later captures a demonic grunt with a voice recorder after asking the demon too many questions. During the 15th night, the hallway light flickers on and off and demonic noises are heard by Katie’s side of the bed. Katie gets up and stares at Micah sleeping for two hours before going outside to sit on the backyard swing. Micah tries to convince Katie to come inside, but she refuses. Micah returns inside and finds the TV on. Katie remembers nothing the next day when Micah asks what was going on.

Katie becomes irate when Micah brings home a Ouija board despite Dr. Fredrichs’ warnings. Katie is mad and says that she no longer wants to record the happenings. The two leave the house that evening, leaving the board in the living room. The Ouija board’s planchette moves on its own and a small fire erupts on it and extinguishes itself. In the morning the couple see the message and Katie pleads with Micah to contact the demonologist, but he refuses. During the 17th night, Micah sprinkles talcum powder in the hallway and bedroom. The couple are awakened by creaks, and they find non human footprints leading to the bedroom from the attic, where Micah finds a burnt photograph of a young Katie, previously thought to have been destroyed in an unexplained house fire when Katie was eight years old. Katie finally calls the demonologist, Dr. Averies, but he is unavailable.

In the afternoon while the couple are eating a pizza, the sound of shattering glass is heard upstairs. Katie finds their picture broken and Micah’s face on the photo scratched. This is unusual, as activity never occurs during the day. Katie feels the demon breathing on her and flees downstairs. During the 18th night, a light flickers on and off. Micah is awakened by this and decides to investigate, but the demon suddenly slams the bedroom door. After attempting to open the door, the demon angrily growls from the other side. Micah eventually gets out and demands the demon to show itself. Loud shakes and bangs occur so the couple return to bed. Dr. Fredrichs returns the next morning and immediately has a sense of dread, due to the massive amount of demonic energy in the house. He apologetically leaves despite their pleas for his help, stating that his presence is only making the demon angry. During the 19th night, the bed covers move, a light turns on and off, a non human shadow is seen on the door before Katie awakes from a blow in her face. The next day, Micah reads online about a woman from the 1960s who became possessed during an exorcism and killed herself.

Katie is pulled out of the bedroom by an unseen force during the 20th night. When Micah rushes to help, the demon slams the door on him. Micah discovers bite marks on her back the next morning. Later, Micah finds Katie gripping a cross so tightly that it bloodies her palm. He angrily burns the cross in the fireplace, and packs to head for a motel. Just as they are set to leave, Katie insists they will be okay now, her voice flat. When Micah looks away, Katie gives a disturbing smile to the camera.

The following night, Katie gets out of bed and stares at Micah for two hours before going downstairs. After a moment of silence, Katie screams Micah’s name along with another inhuman voice; he abruptly rushes to her. Katie’s screaming stops and heavy footsteps come up the stairs. Micah’s body is violently hurled at the camera, which is knocked sideways, revealing Katie in the doorway. She slowly walks into the room, stained with blood. Crouching and crawling, she sniffs Micah’s body and then looks up at the camera with a smile. As she lunges toward the camera, her face takes on a demonic appearance just as the scene cuts to black. An epilogue text states that Micah’s body was discovered by the police on October 11, 2006, and Katie’s whereabouts remain unknown.

In its original version, the film featured a different ending. After going downstairs on the final night and waking Micah with a scream, only Katie is shown returning to the bedroom, holding a large bloody kitchen knife, her shirt bloodied. She sits beside the bed, holding the knife and rocking herself for hours. The next day, her friend Amber calls and leaves a message, expressing concern. That night, Katie is still sitting and rocking by the bed, and Amber can be heard entering the house. During this short period, Katie stops rocking, but when Amber screams (evidently after finding Micah’s body) and runs out of the house, she resumes her motion.

Half an hour later, police enter the home and discover Micah’s body as well. They find Katie and call to her. She wakes from her catatonic state and seems confused. As she approaches them with the knife in hand, they ask her to drop the weapon. The bedroom door behind them slams shut, startling them and causing them to shoot Katie, who collapses on the floor. The police then discover the camera, still running. A dedication to Katie and Micah are shown, while a police conversation can be heard. The original ending for the film was available for a time for viewing on the Internet before Paramount exerted a claim of copyright on the material.

Once Paramount acquired the film, two new endings were developed for the film, one of them being the one seen in theaters. The scrapped ending was shown at only one public viewing and was later offered as an alternate ending on the DVD and Blu-ray releases of the film. In this ending, Katie gets out of bed and stands staring at Micah, as she did in the theatrical ending, except she does not move to Micah’s side of the bed. After three hours, she goes downstairs and screams, waking Micah, who runs downstairs. The screaming continues, and a struggle is heard before the noises abruptly stop. Katie then walks into the bedroom, bloodied, with a knife in hand. She closes and locks the bedroom door, before walking up to the camera, standing idle. She then lifts the knife and slits her own throat, then falls to the floor, dead. 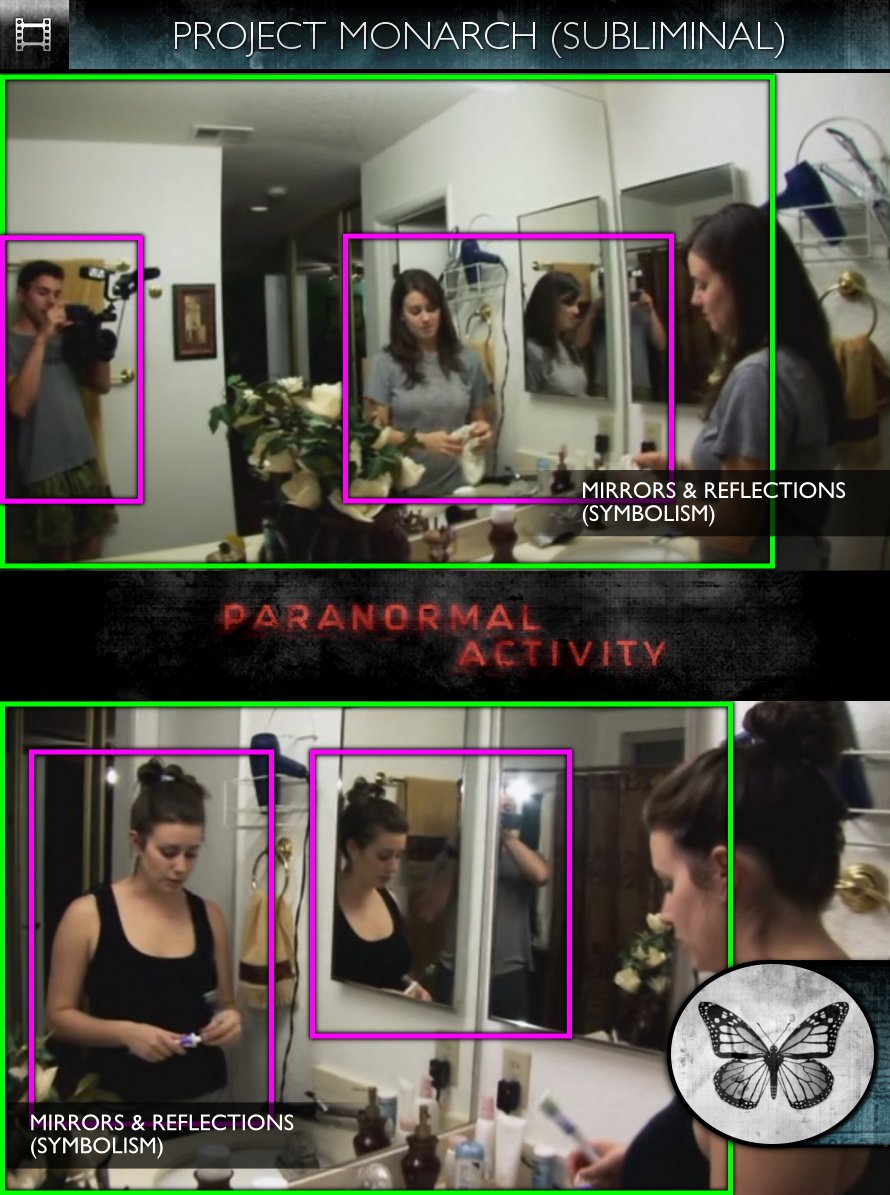 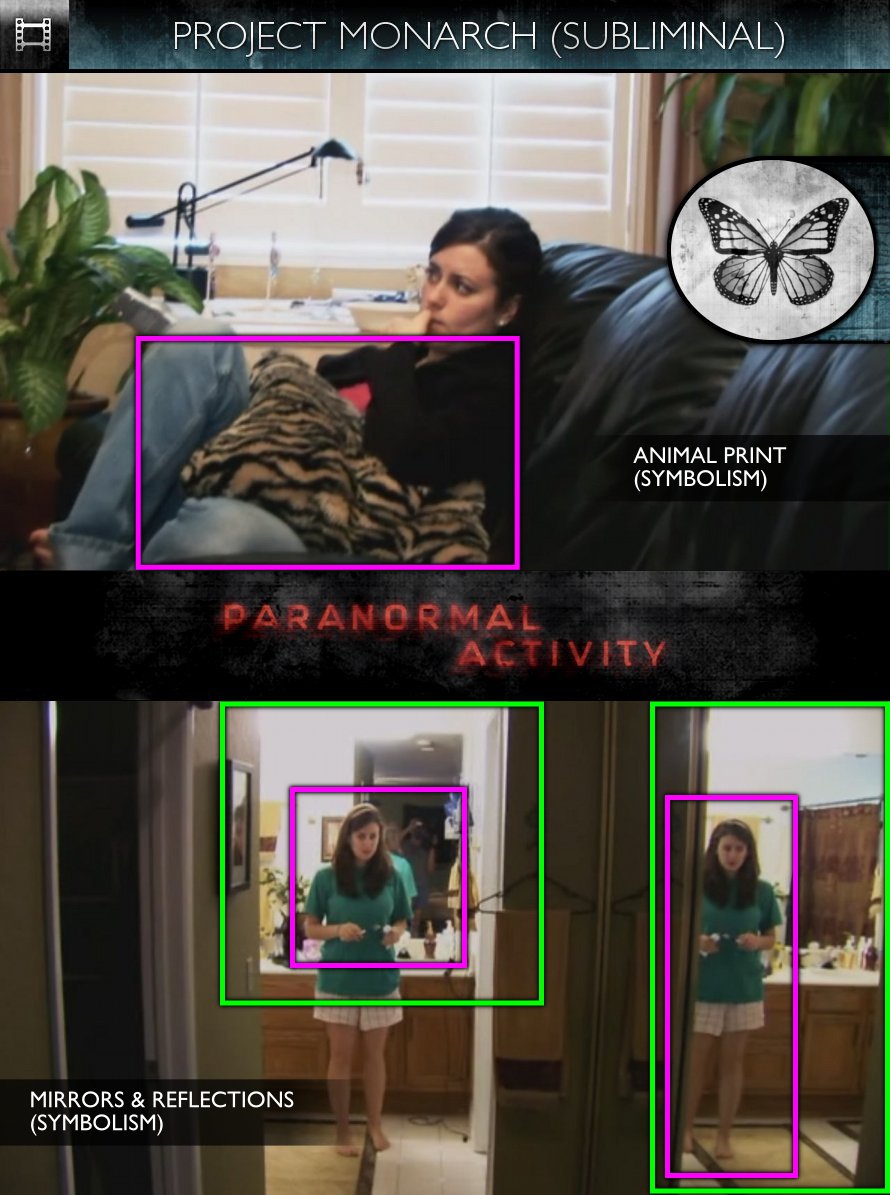 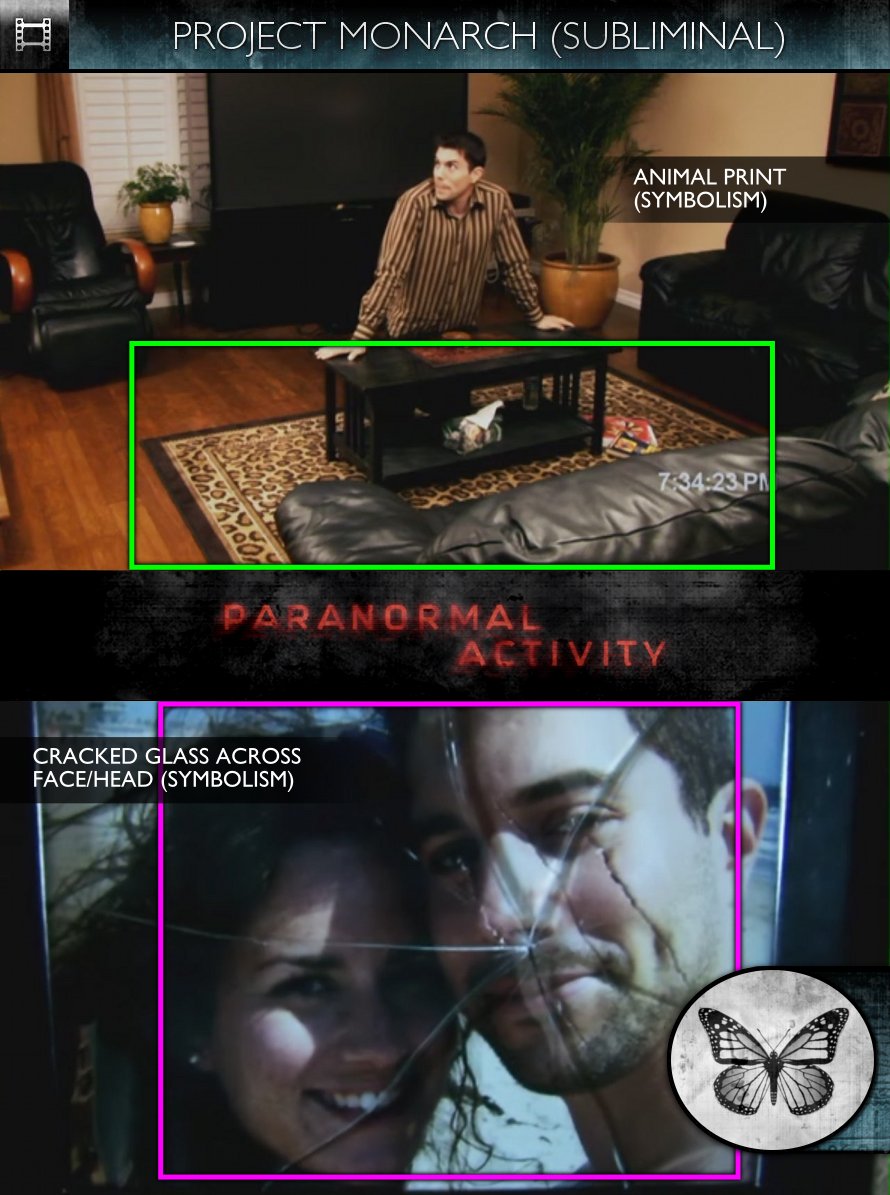 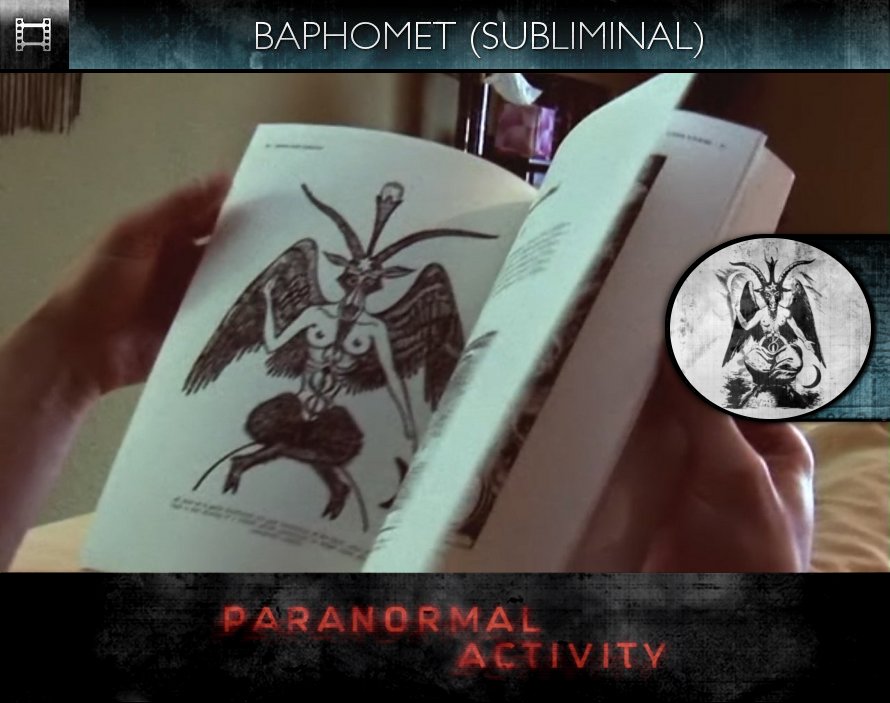 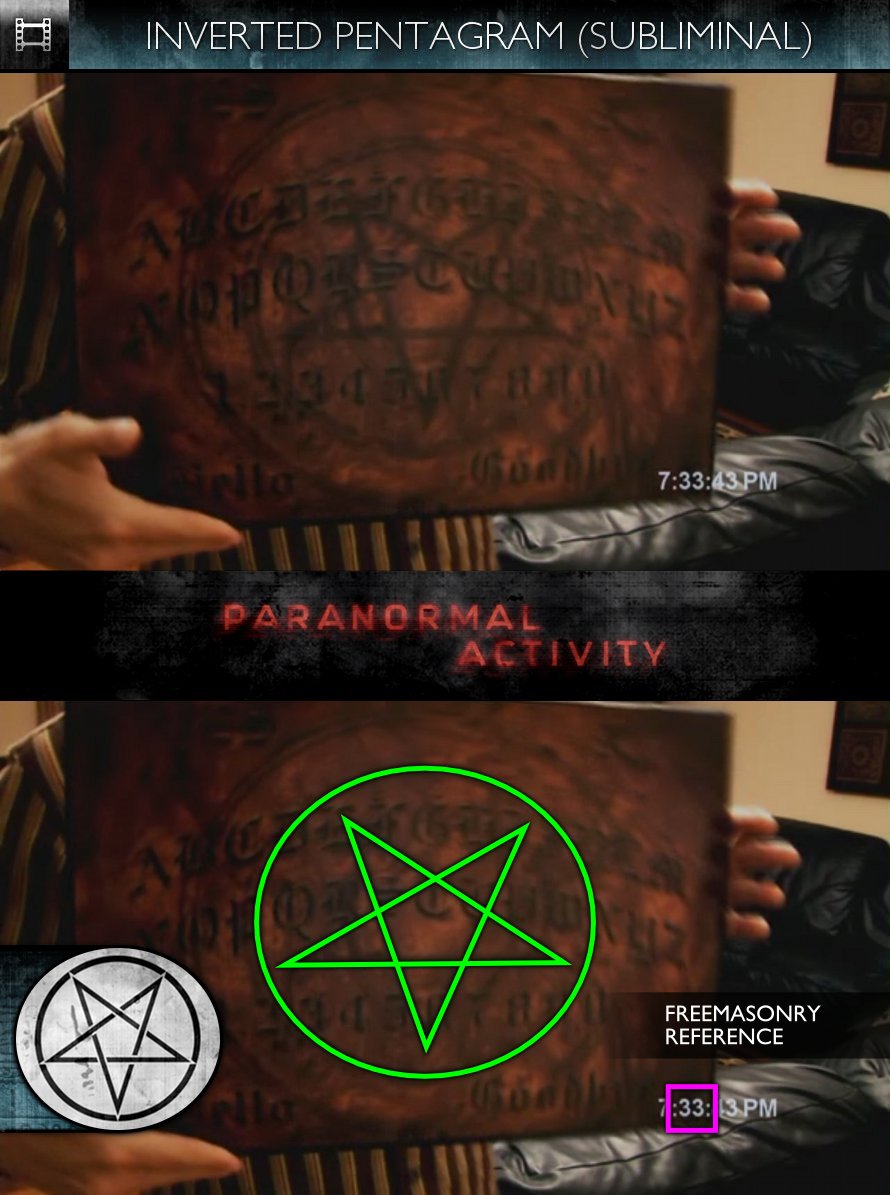 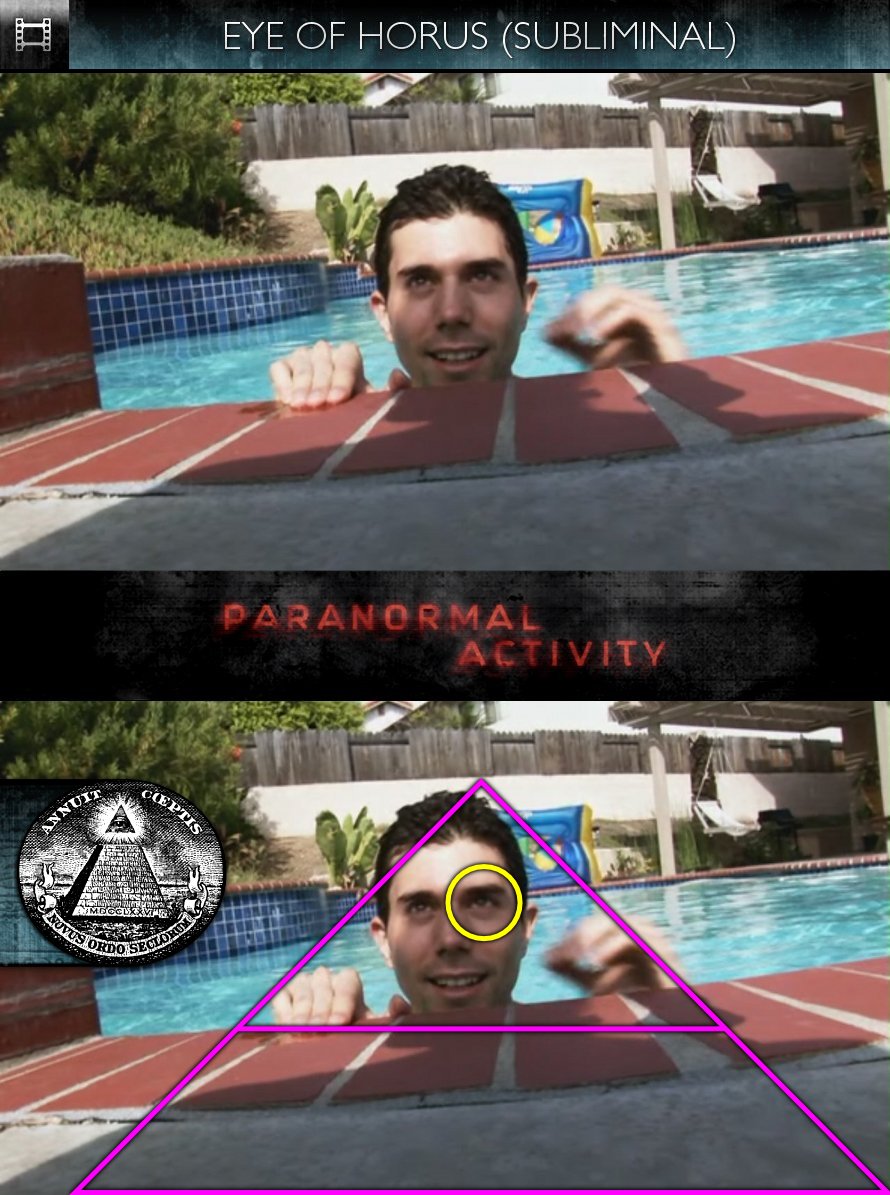