The Rocky Horror Picture Show is a 1975 musical comedy horror film adaptation of the musical stage production, The Rocky Horror Show, originally conceived by Richard O’Brien who co-wrote the film’s screenplay with director, Jim Sharman. The production is a humorous tribute to the science fiction and horror B movies of the late 1930s through early 1970s. It stars Tim Curry, Susan Sarandon and Barry Bostwick along with cast members from the original Royal Court Theatre, Roxy Theatre and Belasco Theatre productions.

The film was shot at Bray Studios, and an old country estate called Oakley Court, in Berkshire, England. The estate is best known for its use in Hammer Horror productions. Twentieth Century Fox insisted on casting the two characters of Brad and Janet with American actors, Barry Bostwick and Susan Sarandon. Some of the costumes from the film were originally used in the stage production. Props and set pieces were reused from old Hammer films. Although the film is both a send-up and tribute to many of the science fiction and horror movies from the 1930s up to the 1970s, costumer designer Sue Blane had not conducted any research in designing for the film. Blane believes that the costumes in the film directly impacted on the development of punk music fashion.

Although largely ignored upon release, it soon gained notoriety as a midnight movie when audiences began participating with the film at the Waverly Theater in New York City in 1976. Audience members returned to the cinemas frequently and talked back to the screen and began dressing as the characters, spawning similar performance groups across the United States. Still in limited release nearly four decades after its premiere, it has the longest-running theatrical release in film history. Today, the film has a large international cult following and is one of the most well-known and financially successful midnight movies of all time. It was selected for preservation in the United States National Film Registry by the Library of Congress in 2005. The film’s creative team also produced Shock Treatment, a stand alone movie using the characters of Brad and Janet and featuring many of the same cast.

A criminologist narrates the tale of the newly engaged couple Brad Majors and Janet Weiss who find themselves lost and with a flat tire on a cold and rainy late November evening. Seeking a telephone, the couple walk to a nearby castle where they discover a group of strange and outlandish people who are holding an Annual Transylvanian Convention. They are soon swept into the world of Dr. Frank N. Furter, a self-proclaimed transvestite from Transsexual, Transylvania. The ensemble of convention attendees also includes servants Riff Raff, his sister Magenta, and a groupie named Columbia.

In his lab, Frank claims to have discovered the “secret to life itself”. His creation, Rocky, is brought to life. The ensuing celebration is soon interrupted by Eddie, an ex-delivery boy, partial brain donor to Rocky, and Columbia’s lover, who rides out of a deep freeze on a motorcycle. In a jealous rage, Frank corners him and kills him with an ice axe. He then departs with Rocky to a bridal suite.

Brad and Janet are shown to separate bedrooms where each is visited and seduced by Frank, who poses as Brad (when visiting Janet) and then as Janet (when visiting Brad). Janet, upset and emotional, wanders off to look for Brad, whom she discovers, via a television monitor, is in bed with Frank. She then discovers Rocky, cowering in his birth tank, hiding from Riff Raff, who has been tormenting him. While tending to his wounds, Janet becomes intimate with Rocky, as Magenta and Columbia watch from their bedroom monitor.

After discovering that his creation is missing, Frank returns to the lab with Brad and Riff Raff, where Frank learns that an intruder has entered the building. Brad and Janet’s old high school science teacher, Dr. Everett Scott, has come looking for his nephew, Eddie. Frank suspects that Dr. Scott investigates UFOs for the government. Upon learning of Brad and Janet’s connection to Dr. Scott, Frank suspects them of working for him. Frank, Dr. Scott, Brad, and Riff Raff then discover Janet and Rocky together under the sheets in Rocky’s birth tank, upsetting Frank and Brad. Magenta interrupts the reunion by sounding a massive gong and stating that dinner is prepared.

Rocky and the guests are served dinner, which they soon realize has been prepared from Eddie’s mutilated remains. Janet runs screaming into Rocky’s arms and is slapped and chased through the halls of the castle by a jealous Frank. Janet, Brad, Dr. Scott, Rocky, and Columbia all meet in Frank’s lab, where Frank captures them with the Medusa Transducer, transforming them into statues. They are then forced to perform a live cabaret floor show with Frank as the leader.

Riff Raff and Magenta interrupt the performance, revealing themselves and Frank to be aliens from the planet Transsexual in the galaxy of Transylvania. They stage a coup and announce a plan to return to their home world. In the process, they kill Columbia, Rocky and Frank, who has “failed his mission”. They release Brad, Janet, and Dr. Scott, then depart by lifting off in the castle itself. The survivors are then left crawling in the dirt, and the narrator concludes that the human race is equivalent to insects crawling on the planet’s surface. 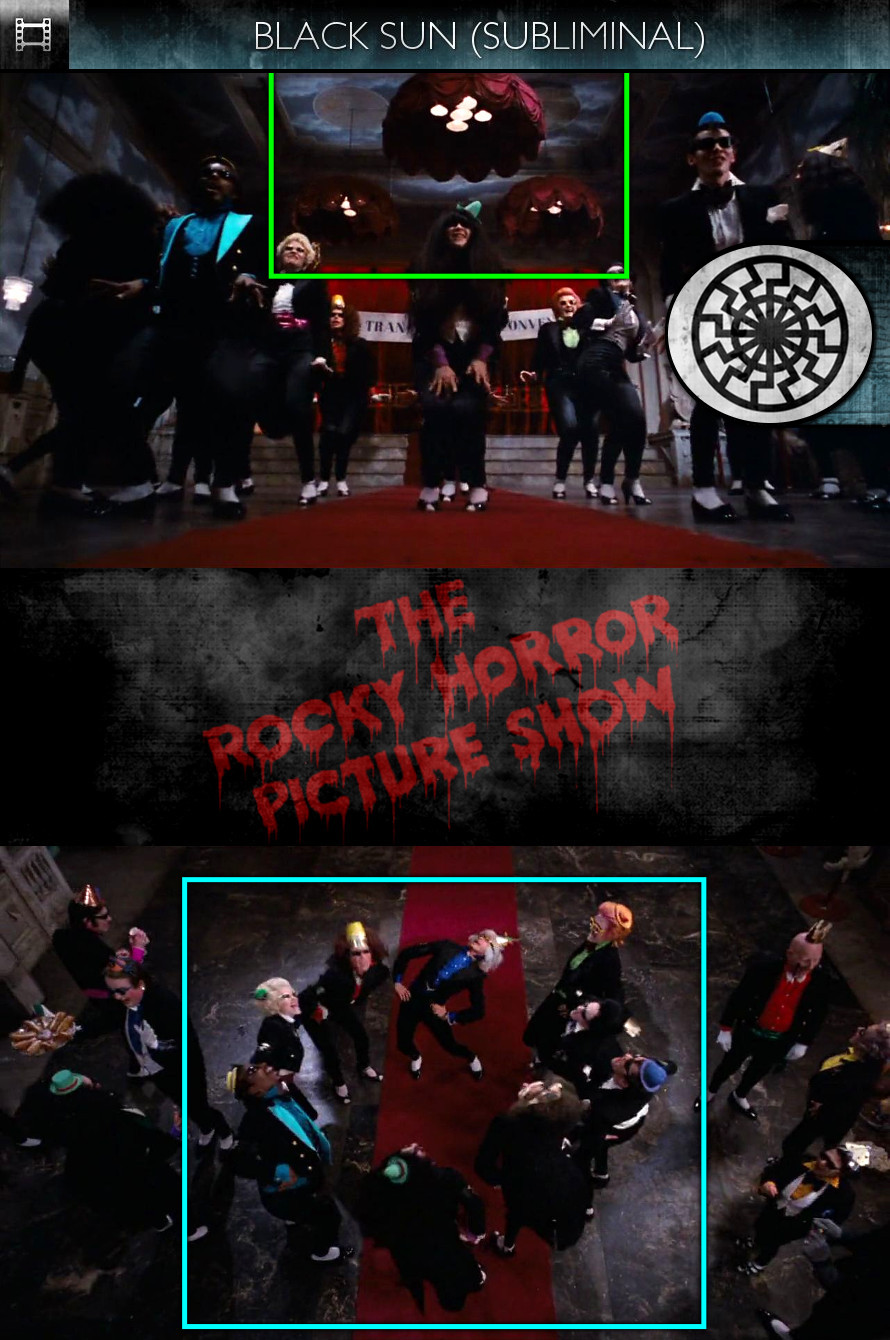