The Matrix is a science fictionactionmedia franchise created by Andy and Larry Wachowski and distributed by Warner Bros. Pictures. The series began with the feature film The Matrix (1999), and continued with two sequels, The Matrix Reloaded (2003) and The Matrix Revolutions (2003). The characters and settings of the films are further explored in other media set in the same fictional universe, including animation, comics and video games. 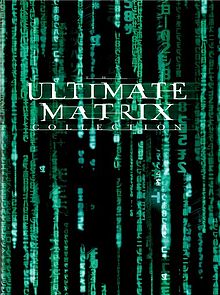 The series depicts a dystopia in which Earth is dominated by sentient machines that were created early in the 21st century and rebelled against humanity. At one point, humans attempted to block out the machines’ source of solar power by covering the sky in thick, stormy clouds. However, the machines devised a way to extract humans’ bioelectricity and thermal energy by growing people in pods, while their minds are kept under control by cybernetic implants connecting them to a simulated reality called the Matrix.

The virtual reality world simulated by the Matrix resembles human civilization around the turn of the 21st century (this time period was chosen because it is supposedly the pinnacle of human civilization). The majority of the stories in the Matrix franchise take place in a vast unnamed megacity. This environment is practically indistinguishable from reality (although scenes set within the Matrix are presented on-screen with a bias toward the colour green), and the majority of humans connected to the Matrix are unaware of its true nature. Most of the central characters in the series are able to gain superhuman abilities within the Matrix by using their understanding of its true nature to manipulate its physical laws.

The virtual world is first introduced in The Matrix. The Animatrix short film “The Second Renaissance” and the short comic “Bits and Pieces of Information” show how the initial conflict between humans and machines came about, and how and why the Matrix was first developed. Its history and purpose are further explained in The Matrix Reloaded.