Fantastic Mr. Fox is a 2009 American stop-motion animated film based on the Roald Dahl children’s novel of the same name. This story is about a fox who steals food each night from three mean and wealthy farmers. The farmers are fed up with Mr Fox’s theft and try to kill him, so they dig their way into the foxes’ home. However, the animals are able to outwit the farmers and live underground.

Produced by Regency Enterprises and Indian Paintbrush, and released in the autumn of 2009, the film features the voices of George Clooney, Meryl Streep, Jason Schwartzman, and Bill Murray. For director Wes Anderson, it was his first animated film and first film adaptation.

Development on the project began in 2004 as collaboration between Anderson and Henry Selick (who worked with Anderson on the 2004 film The Life Aquatic with Steve Zissou) under Revolution Studios. In 2007 Revolution folded, Selick left to direct Coraline, and work on the film moved to 20th Century Fox. Production began in London in 2007. 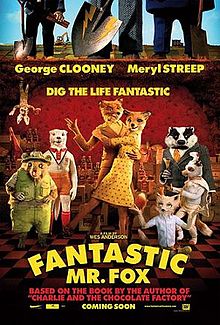 While raiding a squab farm, Mr. Fox (George Clooney) and his wife Felicity (Meryl Streep) trigger a fox trap and become caged. Felicity reveals to Fox that she is pregnant and pleads with him to find a safer job when they escape.

Two years later (12 in Fox Years), the Foxes and their sullen son Ash (Jason Schwartzman), are living in a hole. Fox, now a newspaper columnist, moves the family into a better home in the base of a tree, ignoring the warnings of his lawyer Badger (Bill Murray) about how dangerous the area is for foxes. The tree is located very close to facilities run by three mean farmers- Walter Boggis (Robin Hurlstone), Nathan Bunce (Hugo Guinness), and Franklin Bean (Michael Gambon). Soon after the Foxes move in, Felicity’s nephew Kristofferson (Eric Chase Anderson) comes to live with them, as his father has become very ill with double pneumonia. Ash finds this situation intolerable; his soft-spoken cousin is apparently superior to him at sports, and everyone, including his father, Mr Fox, is charmed by Kristofferson at Ash’s expense.

Fox and the opossum who works as a building superintendent, Kylie (Wallace Wolodarsky), steal produce and poultry from the three farms. The farmers decide to kill Fox and camp out near the family’s tree. When he emerges the farmers open fire, but only manage to shoot off his tail. They then attempt to dig Fox out. After demolishing the site of the tree, the farmers discover the Foxes have dug an escape tunnel.

Reasoning that the Foxes will have to surface for food and water, the farmers lie in wait at the tunnel mouth. Underground, Fox encounters Badger and many other local animal residents whose homes have also been destroyed. As the animals begin fearing starvation, Fox leads a digging expedition to tunnel to the three farms, robbing them clean. While the other animals feast, Ash and Kristofferson, beginning to reconcile after Kristofferson defended Ash from a bully, return to Bean’s farm, intending to reclaim Mr Fox’s tail. When they are interrupted by the arrival of Bean’s wife, Ash escapes but Kristofferson is captured.

Discovering that Fox has stolen their produce, the farmers flood the animals’ tunnel network with cider. The animals are forced into the sewers, and Fox learns that the farmers plan to use Kristofferson to lure him into an ambush. The animals are confronted by Rat (Willem Dafoe), Bean’s security guard. After a struggle with Fox leaves him mortally wounded, Rat divulges Kristofferson’s location.

Fox asks the farmers for a meeting in town near the sewer hub; he will surrender in exchange for Kristofferson’s freedom. The farmers set up an ambush, but Fox and the others anticipate it and launch a counterattack. Fox, Ash and Kylie slip into Bean’s farm. A much-matured Ash frees Kristofferson and braves enemy fire to release a rabid beagle to keep the farmers at bay.

The animals become accustomed to living in the sewers with others considering moving in. Ash and Kristofferson settle their differences and become good friends. Fox leads his family to a drain opening built into the floor of a supermarket owned by the three farmers. Celebrating their new food source and the news that Felicity is pregnant again, the animals dance in the aisles.