Lara Croft: Tomb Raider is a 2001 action and fantasy film adapted from the Tomb Raider video game series. It was directed by Simon West and starred Angelina Jolie as Lara Croft, with Jon Voight, Chris Barrie, Iain Glen, Noah Taylor, and Daniel Craig in supporting roles. It was released in U.S. theaters on June 15, 2001. The film was a commercial success. The film held the title of highest grossing video game to film adaptation worldwide, until on June 16, 2010, the record was taken by Prince of Persia: The Sands of Time, which grossed $335 million worldwide as of October 10, 2010 (although it is still #1 with adjustments for inflation). Reviews were largely negative, with critics criticizing the sloppy direction and video-game-esque action-sequences, but praising Jolie’s performance.

A sequel, Lara Croft Tomb Raider: The Cradle of Life, was released in 2003. 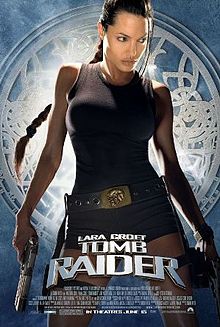 Lara Croft (Angelina Jolie) is in an Egyptian tomb, seeking a diamond. As she approaches it she is attacked by a large robot. She disables it by ripping out its motivational circuits. She takes the diamond, which is revealed to be a memory card labeled “Lara’s Party Mix”, and inserts it into a laptop computer inside the robot, whereupon it plays music. Now it is revealed that the scene took place in a practice arena in her home, and that her assistant Bryce (Noah Taylor) programmed the robot, SIMON, to challenge her in combat.

It is the day of the first phase of a planetary alignment, culminating in a solar eclipse. In Venice, the Illuminati search for a key to rejoin halves of “the triangle”, which must be done by the final phase of the alignment. Manfred Powell (Iain Glen), an Illuminati member, makes assurances that they are almost ready, but in reality he has no idea where to find the key. Lara’s butler, James “Hilly” Hillary (Chris Barrie), tries to interest her in several projects but she ignores them. May 15, as Hilly is aware, is the day that Lara’s father disappeared many years earlier. She never recovered from his loss.

Later that night, Lara has a dream reminding her what her father said about the alignment and an object linked to it called the Triangle of Light. Waking, she is aware of a clock ticking. Searching for it, she discovers a secret chamber under the staircase with a carriage clock that had spontaneously begun ticking. Bryce probes it and discovers a strange device hidden inside the clock.

Since the device resembles a clock, Lara consults a clock expert friend of her father’s, Mr. Wilson (Leslie Phillips). She believes it is connected to the “Triangle of Light”, but Wilson disavows knowledge of the clock or the Triangle. Lara encounters Alex West (Daniel Craig), an American archeologist and friend with unscrupulous methods. They are attracted to each other, but Lara cannot abide his for-profit attitude. That night, Lara is contacted by Wilson, who tells her that he gave her name to Powell in regards of the clock.

The next morning, Lara receives a letter from her father, arranged to arrive after the beginning of the alignment. In her library, she finds a secret letter in a book where he explains that the clock is the key to retrieve two halves of the mystic Triangle of Light, which is revealed to be an object of phenomenal destructive power that granted its wielder power over time and space. He says that it was made from a metal found in a meteor crater made by a meteor that had fallen to earth during a previous alignment. Initially housed in a city built in the meteor crater by those who worshiped the object, misuse of the Triangle’s power destroyed the city and so it was split into two halves; one was hidden in a tomb in Cambodia, the other half in the ruined city itself, in modern-day Siberia. Her father urges her to find and destroy both halves before the Illuminati can find it.

In Cambodia, West figures out part of the puzzle on how to retrieve the triangle half, but Lara manages to successfully grab the piece. Before everyone can leave, the liquid metal which came out with the piece brings the statues in the temple to life and attacks the team, killing some members. Lara is left to fight off and destroy a huge six-armed guardian statue similar to Brahma, the Hindu god of creation. She successfully defeats it by weakening it and leaves the temple by diving through a waterfall. She then travels to a Buddhist town where a young monk welcomes her. After a worship service, an aged monk who is the leader there gives Lara some tea and as they converse, he tells her that he knew her father before.

She and Powell arrange to meet in Venice, since each of them has what the other needs to finish the Triangle. Powell proposes a partnership to find the Triangle, and informs Lara that her father was a member of the Illuminati, which she vehemently denies. Though hesitant at first, she, along with Bryce, meets with Powell for the trip to Siberia. Inside the chamber, there is a giant model of the solar system, which activates as the alignment nears completion. Lara retrieves the last half of the Triangle, but when Powell tries to complete it, the halves will not fuse. He realizes that Lara knows the solution to the puzzle, and kills West in order to persuade her to complete the Triangle to save both West’s life and her father’s. Lara reluctantly complies, and they then struggle for control of the Triangle, with Lara gaining the upper hand.

Lara then finds herself in a strange alternate existence facing her father Richard Croft (Jon Voight). He explains that it is a crossing of time and space, and urges her to destroy the Triangle instead of using it to save his life. She leaves her father and returns to the chamber, where time is slowly running backwards from the point where Powell killed West. Croft takes the knife he threw into West’s chest and reverses it, then destroys the Triangle, which returns time to its normal flow and directs the knife into Powell’s shoulder. The chamber begins to self-destruct, Everyone turns to leave, but Powell tells Croft that he killed her father and retrieved his pocket watch with a picture of Lara’s mother inside. Lara and Powell engage in a hand to hand fight with Lara emerging victorious. After Powell is killed, she retrieves the watch and escapes as the chamber crumbles.

At the mansion, Hilly and Bryce are shocked to see Lara wearing a dress. She goes into the garden to her father’s memorial, then returns inside, where Bryce has a reprogrammed SIMON, ready to challenge Lara once again. Hilly reveals a silver tray holding Lara’s pistols, which she takes with a smile. 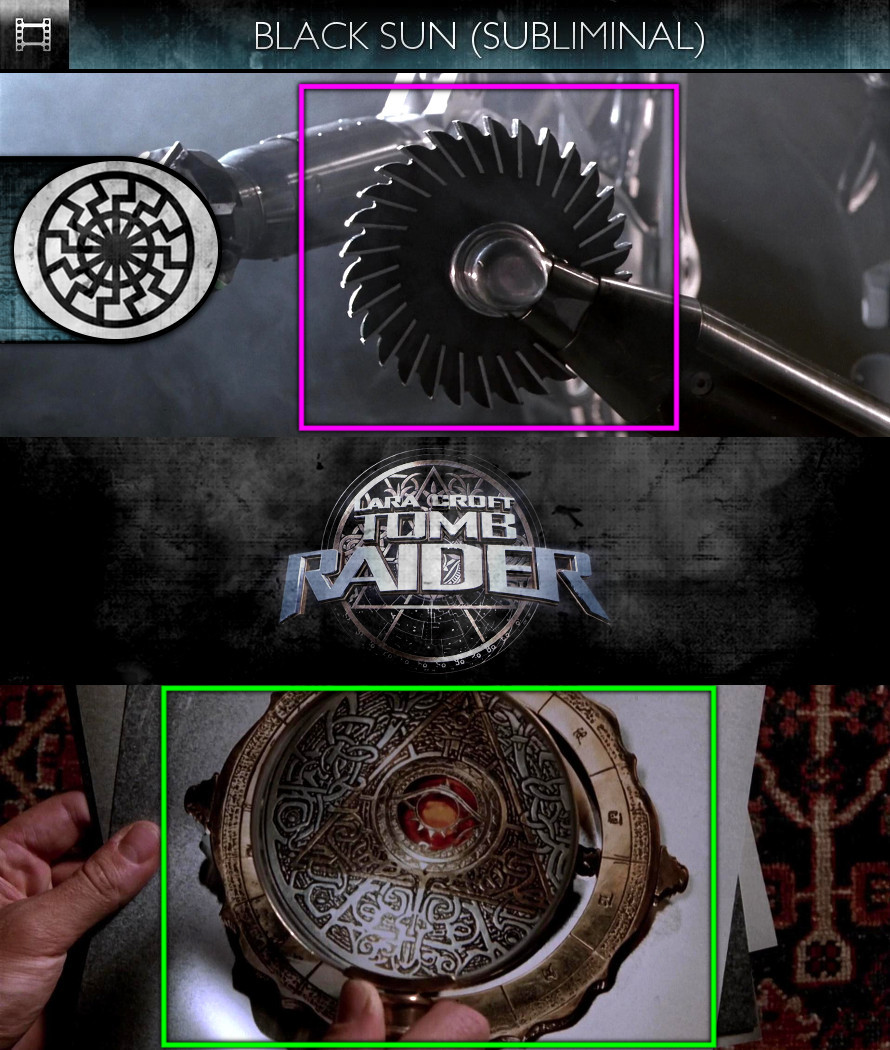 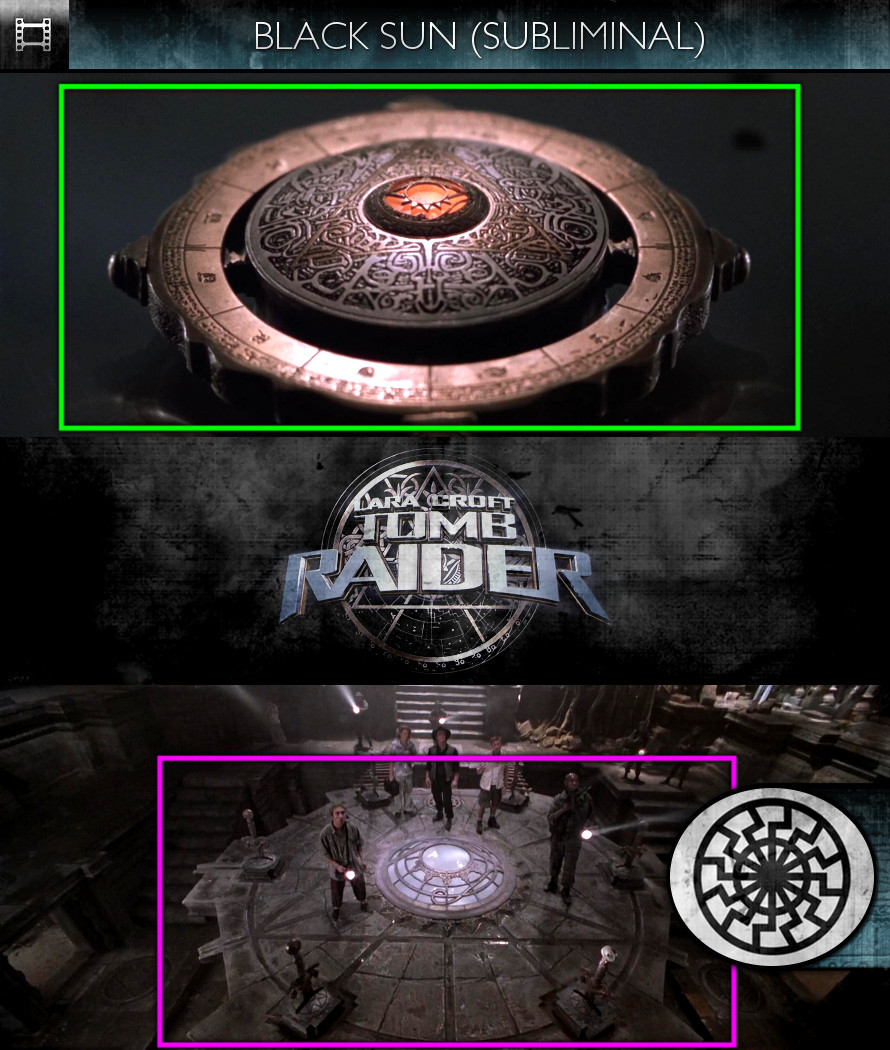 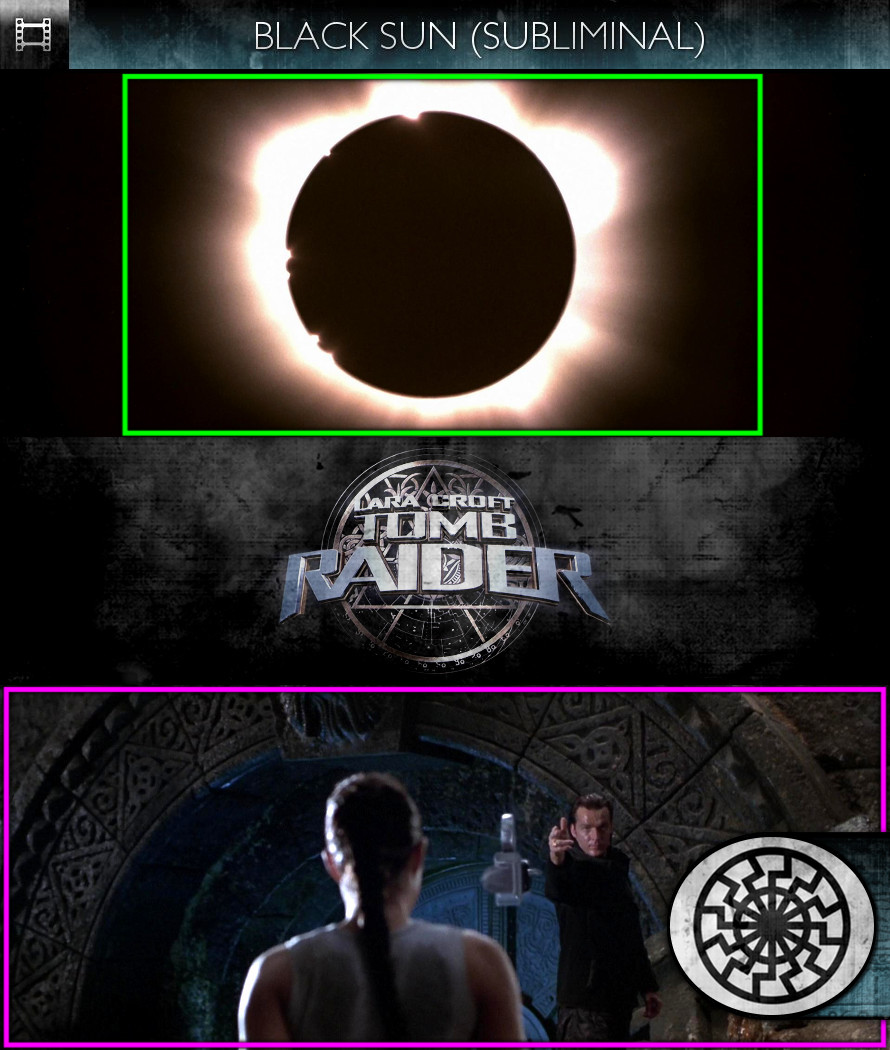 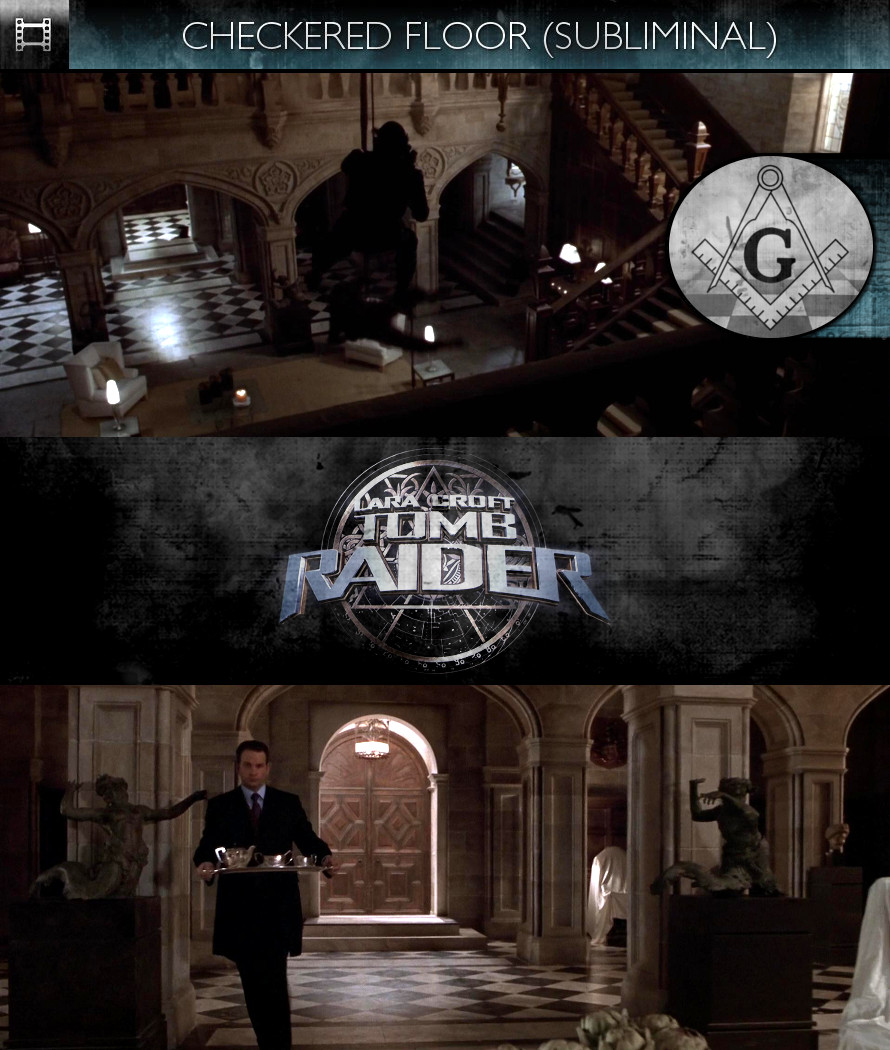 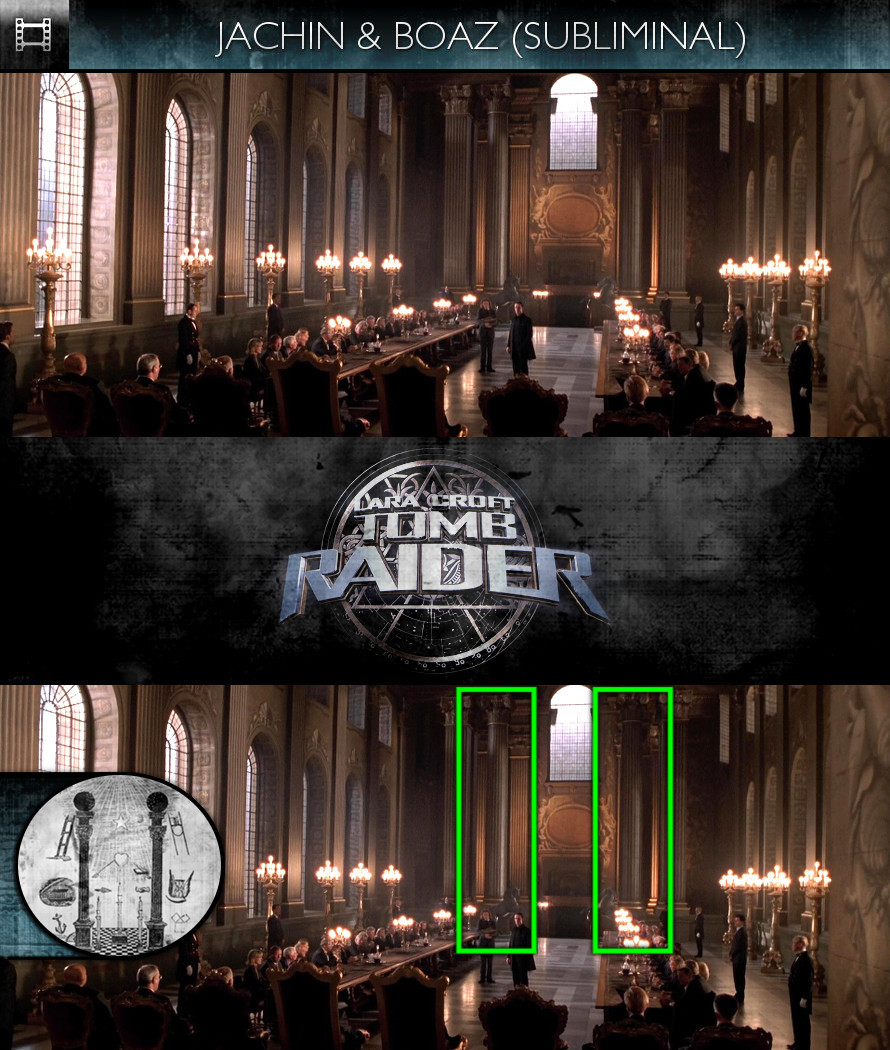 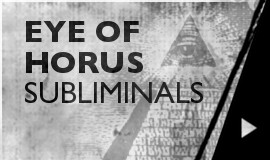