Return to Oz is a 1985 fantasy adventure film based on L. Frank Baum’s Oz books, mainly The Marvelous Land of Oz and Ozma of Oz. The plot begins with Dorothy’s return to the Land of Oz, and her discovery that the land has been destroyed. Upon her return, Dorothy, alongside her chicken Billina, is befriended by a group of new companions, including Tik-Tok and Jack Pumpkinhead, who help her restore Oz to its former glory.

Directed by Walter Murch, an editor and sound designer, Return to Oz stars Nicol Williamson, Jean Marsh, Piper Laurie, Matt Clark, and introducing Fairuza Balk as Dorothy Gale. Released on June 26, 1985, it performed poorly at the box office and received mixed reviews from critics. However, Return to Oz is considered by fans as a more faithful adaptation of the novel than the 1939 film, and has since established a cult following. The film received an Academy Award nomination for Best Visual Effects. 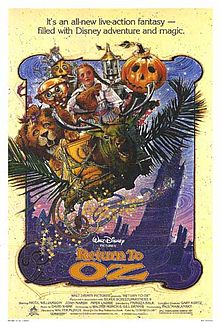 Six months after returning home from the Land of Oz, Dorothy Gale has become a melancholic child who cannot sleep, as she is obsessed with her memories of Oz. This worries Aunt Em and Uncle Henry, who decide to take her to Dr. Worley, known for his revolutionary electric healing treatments. Before going, Dorothy searches for her favorite chicken Billina, and finds a key with an OZ glyph that she believes her friends from Oz sent to her by shooting star. At Dr. Worley’s laboratory, Aunt Em leaves Dorothy under the strict care of Nurse Wilson. Dorothy is taken to have treatment during the onset of a huge thunderstorm, during which the lab has a blackout and Dorothy is saved by a mysterious girl, who reveals that some patients have been driven insane by Worley’s treatment and are hidden in the basement. The two escape the building with Nurse Wilson in pursuit, and fall into a river. The girl vanishes underwater, but Dorothy survives by clambering on board a chicken coop.

Upon awakening, Dorothy finds herself back in Oz with Billina who can now talk. The two discover Dorothy’s old house, surrounded by woods. When Dorothy wonders why they aren’t in Munchkinland, and where all the Munchkins are, the two discover the Yellow Brick Road, now torn apart, which leads them to the Emerald City, now in ruins. All of its citizens (including the Tin Woodsman and Cowardly Lion) have been turned to stone. Pursued by Wheelers (humans who have wheels instead of hands and feet), Dorothy and Billina hide in a secret room accessed by the OZ glyph key and meet a clockwork mechanical man named Tik-Tok. Tik-Tok explains that King Scarecrow had been captured by the Nome King, who is responsible for the destruction of the Emerald City. The three visit a witch named Mombi in the hopes of getting more information, but she is working together with the Nome King and imprisons them in her attic.

Dorothy, Billina, and Tik-Tok meet Jack Pumpkinhead, who explains that he was brought to life via Mombi’s Powder of Life. Dorothy formulates a plan to go to the Nome King’s mountain, by stealing the Powder of Life and using it to vivify The Gump, the head of a moose-like animal whose body they put together using two sofas, palm leaves, a broom, and rope. Using “the Gump” as a mode of transport, the group escapes and flies across the Deadly Desert to the Nome King’s mountain.

The group enters the Nome King’s underground domain. The Nome King tells Dorothy that the Scarecrow stole the emeralds from him to build the Emerald City, and should be punished. He does not listen when Dorothy protests that the emeralds preceded the Scarecrow at the city. The Scarecrow has been turned into an ornament, and the group have three guesses each to identify which one he is, or they will be turned into ornaments themselves. Dorothy is the last to try, and is given the chance to go home unscathed. The Nome King has her discarded Ruby Slippers, which he used to conquer the Emerald City. Dorothy refuses to use them to leave for Kansas. After Dorothy goes into the ornaments room, Mombi arrives. The Nome King is furious with her for allowing them to escape and imprisons her in a cage.

On Dorothy’s last guess, she successfully locates the Scarecrow, who has been changed into a green ornament. With the Scarecrow back to normal, Dorothy realizes that people from Oz turn into green ornaments. The hunt for green ornaments yields Jack and Gump, but then the enraged Nome King confronts Dorothy and company in a gigantic, monstrous form where he eats the Gump’s couch body. He then tries to eat Jack Pumpkinhead, but Billina (who was hiding in Jack Pumpkinhead’s head) lays an egg in fright and it falls into the Nome King’s mouth. Eggs turn out to be poisonous to Nomes and the Nome King and his kingdom crumble to pieces. Dorothy finds the Ruby Slippers and wishes for the Emerald City to return to normal and for her and her friends to escape, which they do. They then restore Tik Tok, who had been turned into a medal and come with them on one of the Gump’s antlers. Mombi, still locked in the cage, comes too.

During the celebrations at the restored Emerald City, Dorothy spots the girl who helped her escape the hospital at the beginning: she is Princess Ozma, Jack’s long-lost creator, and the rightful ruler of Oz who had been enchanted into the mirror by Mombi. Ozma declares she forgives Mombi for her crimes against her, since Dorothy already stripped her of her magical powers, and “a witch without her powers is a miserable creature indeed”, a fact that Mombi herself bitterly agrees to. Ozma then takes her place on the throne and Dorothy hands over the Ruby Slippers. Ozma sends Dorothy home, promising that Dorothy is welcome to return whenever she likes.

Back in Kansas, Dorothy is located on a riverbank by her family. Aunt Em reveals that Worley’s hospital was struck by lightning and burned down and Dr. Worley was killed in the fire trying to save his machines. At the same time, Nurse Wilson is being arrested while being locked in a cage on a horse buggy. Upon returning to the farmhouse, Dorothy sees Billina and Ozma peering at her through her bedroom mirror. When Dorothy entreats Aunt Em to come to her room to see Ozma, Ozma silently instructs her to keep her and Oz a secret. Dorothy and Toto then run outside and play.